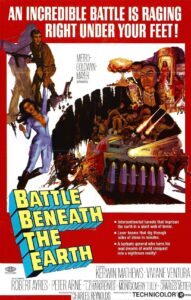 Those who have heard my previous appearances on the podcast, such as my pitching the TV series The Prisoner to Shane in episode 22, will know I have a particular fondness for science fiction. So perhaps it comes as no surprise that I enjoy works that cross between science fiction and spy thriller. The film Battle Beneath The Earth is just such a work and an intriguing film out of the 1960s boom in spy fiction.

The film's basic premise will likely seem a familiar one to fans of the genre. When a US Navy officer follows up claims made by a brilliant but potentially troubled scientist, he and a group of combined military and intelligence experts discover a plot by the Chinese to plant atomic bombs in the United States. Sounds like pretty standard fare, I suppose? The difference here is what gives the film that distinctive, 1950s B-Movieesque title: the Chinese, led by General Chan Lu, are beneath our very feet thanks to laser drills that have allowed them to cross the Pacific Ocean. It's an intriguing take on the old notion of communists as “the enemy within” quite literally.

All of which might suggest the film aims for a big budget, possibly even epic scope. Indeed, despite its American setting, Battle Beneath The Earth was shot entirely in Britain. Not that you might realize that as the film gets away it by and large. One such example is the opening scene in Las Vegas that works until the police car turns out not to be an American police car. The film seems to take its cue from many British shows of the era in that it relies on stock footage a great deal both to show locations and when called upon to display American military hardware en masse. That isn't necessarily a bad thing and indeed might come across as downright charming to viewers of either a certain age or frame of mind.

The film has other pluses going for it as well. Made at the height of the 007-inspired spy craze, it's hard not to see its influence throughout the film. The sets from production designer Jim Morahan show the unmistakable influence of Ken Adam, none more so than the big government laboratory and General Chan Lu's headquarters. The film's action sequences and especially its gunbattles (which, despite the film's title, are numerous) also harken to similar scenes in Bond films such as Goldfinger and even pre-echoes scenes in You Only Live Twice which was released later that same year. The cast list also contains more than its fair share of Bond alumni including Ed Bishop (who appeared in You Only Live Twice), Earl Cameron (Pinder in Thunderball playing an American soldier here), and Martin Benson as the villainous general (having appeared as dissenting gangster Solo in Goldfinger). The result is an entertaining film all around.

Entertaining but far from perfect. Watching it even on first viewing, it is abundantly clear the film didn't have the budget it needed. For example, the American soldiers are all decked out in what looks to be surplus World War II-era uniforms rather than something more fitting to the late 1960s. Something else that adds to the low-budget feeling is repetitive shots during various action sequences to the point of distraction. Nowhere is this more clear than in the climactic chase sequence where shots appear three and four times. It's at times like this, where budget can't keep up with the ambition of the filmmakers, that tends to let the film down.

The film has other issues has well. The most evident from a twenty-first century perspective is the decision to cast Caucasian British actors as the two Chinese villains, a decision highlighting poor make-up attempts to make them appear Asian made worse by surrounding them with Asian extras. Elsewhere, the script and dialogue can feel like cliches strung together for the sake of genre conventions than an organic story. Take the one scene where Kerwin Mathews heroic Commander Shaw and Benson's General Chan Lu meet which does nothing but add cliches and a couple of minutes to the running time. The cliches extend to the Chinese dialogue as well with much talk about “May the Gods protect us,” as so forth. That's without mentioning Vivienne Ventura as potholer Tila Yung who, despite second billing in the credits, only appears in the final third of the film and essentially adds nothing to proceedings besides being an unconvincing love interest. Like the abducent use of stock footage, these are things that might lend charm to viewers of either a certain age or frame of mind and make others cringe.

Where does that leave Battle Beneath The Earth? If you're looking for a serious spy film, you're out of luck. If, on the other hand, you're looking for a lot of fun and can look past issues with production values and casting, you've come to the right place. If nothing else, it's a fun piece of sixties spy-fi.