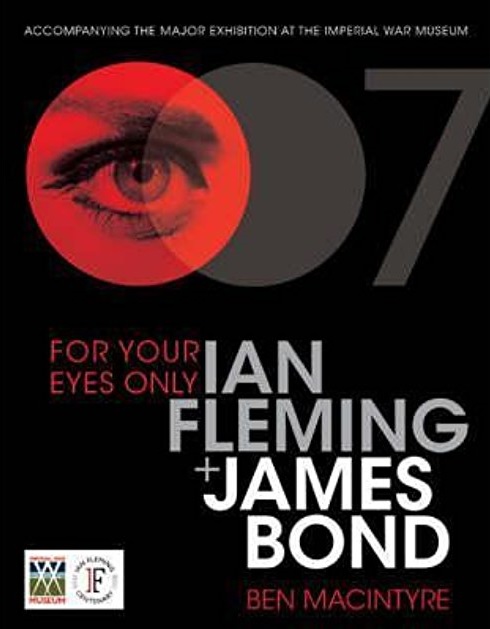 If you are at all a reader of non-fiction related to the world of espionage, the name Ben Macintyre is likely a familiar one. He is, after all, the author of such books as Agent Zigzag and the superb Kim Philby biography A Spy Among Friends. Back in 2008, however, he covered the most famous fictional spy of them all: James Bond. Published in conjunction with the Imperial War Museum exhibit of the same name, in For Your Eyes Only Macintyre crafts a fine look at the life of Ian Fleming and the world of his creation James Bond.

Going in, one might be expecting Macintyre to offer up either a biography of Fleming or a study of his books. The book though is neither of those. Both have been done before as the author himself notes in the book's introduction. What it offers up instead is a mixture of both approaches as it looks at the intersecting lines of fact and fiction between the writer and his famous creation across seven chapters focusing on various elements across the wider Fleming-Bond canon.

Nor is this book merely a puff piece to go alongside the exhibition. Macintyre's other non-fiction shows the depth of research that he goes to and this book is no exception. Perhaps the prime example is the chapter looking at the various candidates put forth as the real James Bond (i.e. the inspiration for the character) which covers quite a cast of characters indeed. It's also quite a balanced look as well as Macintyre is willing to acknowledge both Fleming's gifts as an author and his shortcomings at times such as a later chapter on the role of women both in the books and Fleming's quite sordid personal life. The result is a compelling and informative read.

For Your Eyes Only also has another thing going in its favor: its illustrations. Each chapter features a collection of related imagery ranging from letters Fleming received about his books (including one from a brand he mentioned to thank him for doing so) to stills from various Bond films. There are also plenty of props used as well covering the Bond films up until the Daniel Craig Casino Royale with everything from watches to nuclear bombs on display. There's also some behind the scenes photos of Fleming on the set of the film versions of Dr. No and Goldfinger in 1962 and 1964 respectively.

One particular highlight from the book which takes full advantage of the larger sized format was a two-page spread of one of the original Ken Adam’s production design drawing of the volcano lair from the 1967 film You Only Live Twice. If it wasn't for the page break in the middle, you could almost take it out and put it up on your wall as it nicely brings out the richness and detail of Adam's work.

While it is neither quite a biography of Fleming nor a study of his books (or the films they spawned), For Your Eyes Only is more than just another cash-in on Bond's popularity or a museum puff piece. Macintyre brings his eye and ear for detail and it shines throughout, illuminating even well-known facets of the Bond world. Combined with a wealth of illustrations, the result is a worthy addition to the collection of any serious Bond fan.