Spybrary listeners voted overwhelmingly for Berlin Game to be the first spy book to be discussed in our first ever book club Spybrary edition. Listen to an in-depth conversation on this spy classic with Spybrary host Shane Whaley, Deighton expert Rob Mallows and newcomer to Len Deighton's work but not the spy genre Peter Newman.

WARNING – Please do not listen to the Berlin Game Book Club edition of Spybrary if you have not read the book. Unlike other episodes of the Spybrary Spy Podcast this episode if full of Berlin Game spoilers. It is a book club edition so we cover lots of aspects of the book including many of the twists and turns.

Spybrary Host Shane Whaley claims that this is one of the top 3 spy books ever written, if not the best! ‘Not just a multi-layered spy novel but also a love letter from Len Deighton to Berlin' he says.

Rob Mallows says Berlin Game is the book that got him hooked on Len Deighton.

Peter Newman delivers a fresh approach as this was his first time reading Berlin Game.

What did our panel think of the plot, the characters, the writing, the conclusion? Tune in to find out!

‘Fleming made spy fiction globally popular, but it took Deighton in the Sixties with novels such as The IPCRESS File to make it hip. His finest work, though, came later, in the Eighties, with this trilogy (completed by Mexico Set and London Match) about the disillusioned SIS agent Bernard Samson. Less exuberant than his early books but more subtle, Berlin Game is a terrific feat of plotting that out-le-Carrés le Carré in its sardonic portrait of Secret Service office politics. Tarantino (who had Max Cherry read a copy in Jackie Brown) should hurry up and film it, like he said he would.‘

‘How long have we been sitting here?’ I said. I picked up the field glasses and studied the bored young American soldier in his glass-sided box. ‘Nearly a quarter of a century,’ said Werner Volkmann. His arms were resting on the steering wheel and his head was slumped on them. ‘That GI wasn’t even born when we first sat here waiting for the dogs to bark.’

‘Do you know some quiet restaurant where they have sausage and potatoes and good Berlin beer?’ ‘I know just the place, Bernie. Straight up Friedrichstrasse, under the railway bridge at the S-Bahn station and it’s on the left. On the bank of the Spree: Weinrestaurant Ganymed.’ ‘Very funny,’ I said. Between us and the Ganymed there was a wall, machine guns, barbed wire, and two battalions of gun-toting bureaucrats.'

‘Fiona didn’t have the faintest idea of what an agent’s life was like. Dicky and Bret had no idea either. None of these desk bastards knew. My father used to say, ‘Eternal paranoia is the price of liberty. Vigilance is not enough.’

‘‘Embarrass the KGB! Is that the word he used? They put sane dissidents into lunatic asylums, consign thousands to their labour camps, they assassinate exiles and blackmail opponents. They must surely be the most ruthless, the most unscrupulous and the most powerful instrument of tyranny that the world has ever known. But dear old Chlestakov is frightened you might embarrass them.’' 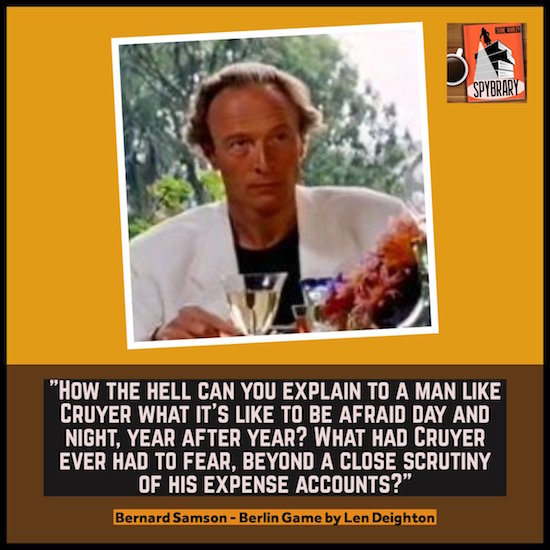 “Both of us work the tough side of the business. I’ve been West a few times, just as you’ve come here. But who gets the promotions and the big wages – desk-bound Party bastards. How lucky you are not having the Party system working against you all the time.’ ‘We have got it,’ I said. ‘It’s called Eton and Oxbridge.” Bernard Samson – Berlin Game

‘‘You can’t run the Soviet Union as though it were the Chelsea Flower Show, darling.’' Fiona Samson – Berlin Game

AND if you want to nominate a book for Spybrary Book Club and/or vote for your choice please do join our listeners Spybrary Group here.

With special thanks to:

Rob Mallows – Deighton Dossier
Peter Newman
and all you Spybrarians who sent in your comments on Berlin Game. Sorry we could not get to all of them but you can always continue the conversation in the Spybrary Listeners Group.