What is The Man Between all about?

He risked it all to become a spy. Now he must pay the price.

A gripping new standalone spy thriller from the winner of the CWA Ian Fleming Steel Dagger for Best Thriller of the Year and ‘the master of the modern spy thriller’ (Mail on Sunday).

One simple task for British Intelligence takes him into a world of danger.

Successful novelist Kit Carradine has grown restless. So when British Intelligence invites him to enter the secret world of espionage, he willingly takes a leap into the unknown.

But the glamour of being a spy is soon tainted by fear and betrayal, as Carradine finds himself in Morocco on the trail of Lara Bartok – a mysterious fugitive with links to international terrorism.

Bartok is a leading figure in Resurrection, a violent revolutionary movement whose brutal attacks on prominent right-wing politicians have spread hatred and violence throughout the West.

As the coils of a ruthless plot tighten around him, Carradine finds himself drawn to Lara. Caught between competing intelligence services who want her dead, he soon faces an awful choice: to abandon Lara to her fate or to risk everything trying to save her.

‘The Man Between is up there with the best – full of thrills, wit and fine writing’ Peter Robinson 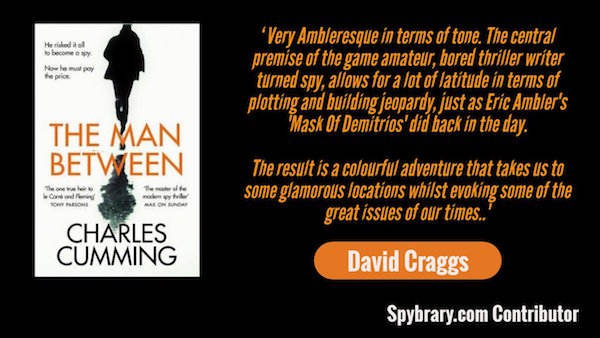 We know Charles has a large following among our Spybrary listeners, so we go on a journey through his other spy novels including the Kell trilogy, Typhoon, Trinity Six etc (links below.)

“It has John le Carre's blessing. It's the first time that the great man has allowed one of his books to be sequalized. If that is a verb. So we are taking existing characters and putting them in new environments and creating new characters for them to come up against. I'm not allowed to say where it's set. I'm not allowed to say who's in it. All I can say is that I think we did a quite a good job and we are nearly there.”

” So what? You're writing a kind of spy story set in Morocco? Like a Jason Bourne thing?

Carradine has always thought that his novels occupied a literary space equidistant between the kiss-kiss-bang-bang of Ludlum and the slow-burn chess games of le Carre.  For reasons of intellectual vanity, he would ordinarily have tried to distance himself from Ramon's description, but he was keen to stop talking about his work.  As a consequence, he readily conceded that his ‘Moroccan thriller' was going to be full of guns and explosions and beautiful women.”

Spybrary Host Shane Whaley on The Man Between. 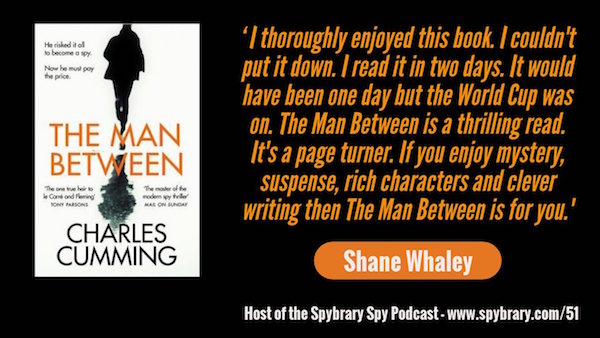 If you enjoyed this interview come and chat with other fans of spy books on our Spybrary listeners discussion group.

The Man With the Golden Gun – Ian Fleming

The Spy Who Came In From The Cold – John le Carre

The Spy Who Loved Me – Ian Fleming