On Episode 31 of the Spybrary Spy Podcast, host Shane Whaley discovers more about Edinburgh Spy Week 2018 with one of the organisers, Professor Penny Fielding.

Penny reveals a stellar line up of speakers  who will be starring at the fifth Edinburgh Spy Week.  Can't make Edinburgh? This interview is still worth listening to you as Shane finds out more about Prof Fielding's love for spy literature and movies.

It’s fun being a podcaster. I just got to chat for over an hour with an English Literature Professor all about spy books. Not my usual Saturday afternoon company

Edinburgh Spy Week  is a unique public event that focuses on espionage fiction and film and the ways in which secrecy and spying run through our history and culture. They bring together creative practitioners and academic researchers to talk about books and ideas in public and accessible ways.

These are some of the topics we cover on Episode 32:

And Much Much More! (Including, as you would expect from an English Lit Professor tons of book recommendations!) 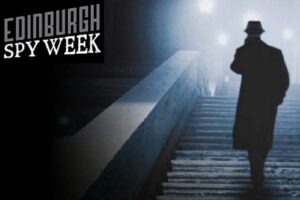 In a celebration of Spy Week’s 5th Birthday, two of our favourite authors from previous years return to talk about spies in contemporary fiction, television and film.

Leading academics discuss wartime Muriel Spark’s work in MI6’s ‘Black Propaganda’ Unit, and how we can read her novels in relation to this.

5.30 Mark Laity: Spooked: Spy Stories and the Loss of Trust

Mark Laity is the Director of Communications at SHAPE, NATO's Military HQ. As BBC Defence Correspondent, he reported from the frontlines of many wars including the break-up of Yugoslavia and the 1991 Gulf War.

Two leading historians and biographers discuss what it means to write about men and women whose profession it is to conceal their identities. How do biographers address the secret lives of spies, and the lives of those who know them?

Spy Week ends with a thrilling encounter between a crime writer and an espionage author! Two of Britain’s most acclaimed writers in these genres discuss the differences and similarities between spy and detective fiction.

Some of the Speakers at Edinburgh Spy Week 2018 include:

Some of the spy books/spy movies we mentioned/reference during this fascinating conversation with Professor Fielding.

The Spy Who Came in From the Cold – John Le Carre

And many many more!

Please note Spybrary earns a small commission for each Amazon purchase. This helps cover the costs of producing the Spybrary Spy Podcast.