Perhaps you’ve listened to Spybrary Episode 24, where Founder and Guide Brian Gray waxed lyrical (well, a lot, to be honest. Too much for one episode, in fact).

Anyway, sadly Brian is winding down the ‘Trail at the end of this year. Yep, in little over a month’s time. He’s worried that Harold Macmillan’s reckoning that anyone working in the security service for more than ten years was mad, may also hold true for even those merely informing and educating others about the shadow world.

So he’s taking no chances and stopping at the end of his ninth year, just to be on the safe side. Just joking. Or is he?

But while other London spy tour companies may be sighing with relief, there’s a twist in the tail.

While obviously there will be no tour schedules for 2019, if you fancy walking on the mean spy streets of London with Brian in the milder Spring or Summer months, then there IS a way.

Brian has very kindly informed me that if anyone books and pays for a tour between now and December 30th 2018 then they can still have a tour in 2019, at a date agreeable to you and Brian. So, if you don’t fancy freezing your bits off on the streets of London at the end of the year, but like the idea of Spring or Summer 2019 instead, then you need to get in touch with him, pronto!

This offer only lasts until December 30th and the final tour date will be subject to availability and other commitments. Prices are found on the ‘Trail website on each of the tour pages.

So, if some of you listeners want to get together, just like what myself and a few others did back in September 2017 when we went on the Trail – and enjoyed ourselves thoroughly, I should add – and have a bit of a spy day in the capital, and spread the price out a bit more evenly among yourselves, then get the ball rolling now. Contact Brian here: https://intelligencetrail.com/contact/

And remember, it’s no use contacting Brian on the 2nd of January pleading for a tour later in the year. He’s telling me – perhaps tongue in cheek, I’m not sure – that he’s going to ramp the tour prices up to stupid amounts so that nobody will be daft enough to ask for one.

Previous PostJames Bond – The Books and Movies of 007 with The Hildebrandians (Ep 63)Next PostThe Company: A Novel of the CIA by Robert Littell
0Shares
London Spy ToursSpy TourSpy ToursThe Intelligence Trail 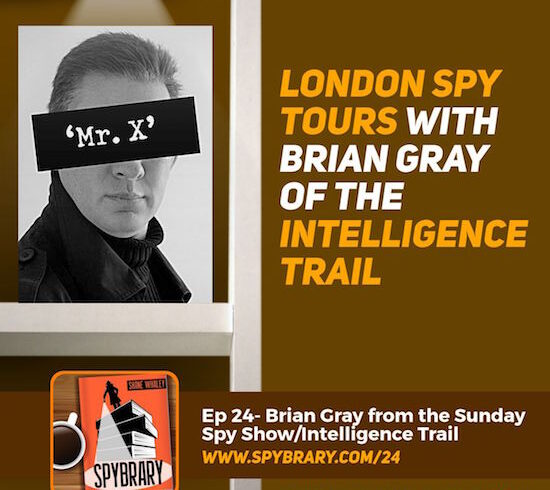 24: London Spy Tours with Brian Gray of the Intelligence Trail