All about Len Deighton.

In the first ever episode of the Spybrary Spy Podcast, host Shane Whaley talks to Len Deighton expert Rob Mallows, the man behind the excellent Deighton Dossier website and blog.

Rob shares with us why he set up the comprehensive Len Deighton website, the only Deighton website endorsed by Len himself. Rob talks us through his favorite Deighton novels and characters and gives his insight into Len's writing and how it differs from John le Carre and Ian Fleming. He suggests what Len Deighton novel to get started with and also tells us which other spy authors he enjoys reading. 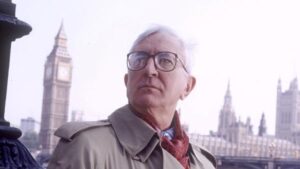 They say never to meet your heroes, so it was with some trepidation that Rob accepted the first of several dinner invites from Len. He shares with us his impressions of the man and reveals some of their conversations. We do talk extensively about Bernard Samson and Game, Set and Match so we hope Rob will come back on the show as we will deep dive into Len Deighton's other novels, characters and the movie adaptations

Who Is Len Deighton?
Leonard Cyril Deighton born 18 February 1929), known as Len Deighton, is a British author. Deighton is considered one of the top three spy novelists of his time (along with Ian Fleming and John le Carré).[1][2] In addition he is a highly acclaimed military historian, cookery writer, and graphic artist. The IPCRESS File (1962), his first novel, was an instant bestseller and broke the mould of thriller writing. The Sunday Times dubbed him “the poet of the spy story”.[3] Deighton’s first protagonist – a nameless spy christened Harry Palmer in the films – was made famous worldwide in the iconic 1960s films starring Michael Caine. (Source wikipedia.)

Links and Resources mentioned on the show.

Books referenced in Episode 001 of Spybrary

All available on Amazon

Disclaimer
Most Amazon links earn us a tiny commission, buying books through our links helps us pay for the hosting costs of Spybrary. Sadly it will never be enough to buy that Aston Martin I have always dreamed of 😉